About one of every three cases of Infertility is caused by Men alone, and some other cases they are involved in about half the time.

The cause of infertility in Male as well as natural solutions to become a father soon is discussed in this Article.

A diagnosis of male infertility can be one of the hardest challenges a man can face. For some, it can be devastating.  Not being able to father a child can make a man feel like he’s failing at one of his most primal responsibilities.

Unfortunately, some men have to cope with the reality that nothing can be done about their infertility.  However, For other men, advances in male infertility treatment offer real help.

Relax there is good news for you. Read on.

Sperm is made in the testicles and stored inside metres of “plumbing” called the epididymis, which lies on top of each testicle. Sperm is nourished by semen, which is made by glands along the way. When the magic moment arrives, about 150 million sperm are ejaculated in a half-teaspoon of semen through the penis.

This whole process hinges on there being proper levels of testosterone and other hormones as well as correct signalling from the nervous system.

Supplimenting,Women ovulates; sends an egg down into the uterus, once a month. This happens about 14 days after menstruation. Sex any time in the five days before ovulation can create a pregnancy. Sex any other time, even the next day after ovulation, will not result in conception.

“We generally advise couples to seek fertility evaluations if they are unable to conceive after 12 months of unprotected intercourse”. About 85% of couples will have had a pregnancy by that point. “If they are over 30, they should seek evaluation after six months.” 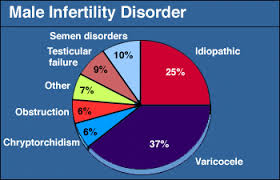 The “male factor” contributes to infertility around half the time, and about one-third of the time, it’s the main cause of infertility. Most often, the problem lies in the process of either making or moving the sperm.

Any of the following can cause a man to have a low sperm count or abnormal sperm:

Varicocele – an abnormal collection of bulging veins above the testicle; they’re the most common cause of correctable male infertility, accounting for 38% of cases undescended testicle infections in the testicle (orchitis), the prostate (prostatitis) or elsewhere in the body that causes a raised temperature chemotherapy for cancer.
Medicines such as anabolic steroids or anti-seizure medicines genetic abnormalities hormone problems. In some cases these problems can be reversed, but other times they can’t. An evaluation by a doctor or specialist is the only way to sort it out. Click here for Vericocele natural solution without surgery

Sometimes making sperm isn’t the problem. The problem is getting the sperm where they need to go. Men with this type of male infertility have normal sperm in the testicles, but the sperm in the semen is either abnormal, very low in number or not there at all.

Causes of this kind of infertility include:

Retrograde ejaculation: In this condition semen ejaculates backwards into the bladder instead of out the penis. Usually previous surgery is the cause.Absence of the main sperm pipeline known as the vas deferens. This condition is a genetic problem.

Obstruction:An obstruction can occur anywhere in the plumbing between the testicles and the penis.

Anti-sperm antibodies:Antibodies can abnormally attack a man’s own sperm on their way to the egg.Up to 25% of infertile men have idiopathic infertility, meaning they have abnormal or low sperm counts for no identifiable reason.

What you need to know about treatments for male infertility.

Male infertility tests: Going under the microscope.
Identifying the cause of a man’s infertility is as much an art as a science. The first step is an evaluation by a specialist in male infertility.

Experts differ in their approach, but here are some of the tests you can expect:

Sperm and semen analysis. They provide a private room (and magazines). You provide a fresh sample of semen.

Experts then assess your sperm count, their shape, movement and other variables.

“Generally, a higher number of normal-shaped sperm means higher fertility”, but exceptions are common. Many men with low sperm counts or abnormal semen are still fertile. And about 15% of infertile men have normal semen and plenty of normal sperm.

Surprisingly, the complete absence of sperm in the semen (a condition known as azoospermia), can be a good thing.

It might suggest a blockage in the “plumbing” that can be corrected.

Physical examination: A thorough physical exam can detect varicocele and give clues to hormone problems. This should ideally be performed by a urologist.

Hormone evaluation: Testosterone and multiple hormones made in the brain control sperm production. However, hormones are not the main problem in 97% of infertile men.

Testicular biopsy:This is done for men with very low or no sperm in their semen. A needle biopsy of the testicle can show whether a man is making healthy sperm. If abundant good sperm are found in the testicle, there’s likely a blockage somewhere.

Genetic testing:Genetic tests can identify specific obstacles to fertility and problems with sperm. Experts differ as to when genetic tests should be done.

OTHER TREATMENT WE OFFER:

These are the  Alphabetical list of treatment we offer (A-Z):

Was this article helpful?